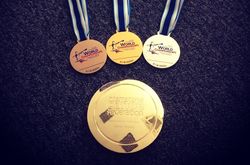 More than thousand of athletes from 70 countries compete in 213 races. These are basic numbers that characterize the 2017 ICF Canoe Sprint World Championships which is currently taking place in Račice. However, there are more interesting fact that complete the top canoeing event which is held in Račice after 59 years. For example...

1100 athletes in the starting lists of all races,

30-minute interval of shuttle buses that bring together athletes, coaches, team members and media as well,

10 000 meals will be distributed during whole week of the Championships,

195 medals for the most successful athletes.

About medals: “We’ve had a long-standing tradition of medals production in Jablonec and in its neighbourhood and we can create them beautiful but we can’t use this advantage in Račice because the ICF supplies them itself to the World Championships,” said Jan Boháč, both president of the Czech Canoe Union and the Organizing Committee of the WCH.

About logistics and transport: “We drive the participants of the World Championships to Ústí nad Labem, Litoměřice, Lovosice but to Prague as well,” added Kurfirst.

About volunteers: “They work all over the area, especially they support racers in the depot. They also work on fans’ coordination, they coordinate parking places, stands, backgrounds and they care about whole course of the Championships,” said their coordinator Jan Plachý.

About food: “We consume 3.5 tons of meat, 2 tons of vegetable, 1.5 tons of fruit, potatoes and more. Other interesting thing is that around 3500 rolls and 500 eggs are eaten per day and one day we made 600 pancakes for dinner,” encloses Kurfirst.