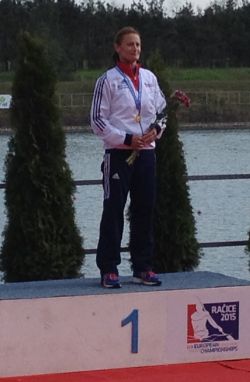 She used to have nausea because of the water, now she became the European champion in paracanoe for the third time in row. Anne Dickens triumphed on a 200 meters track over her competitors with a very comfortable lead. “Now I want more people to understand that there is more life beyond the injury in the sports,” she said after the medals ceremony.

Anne Dickens used to be an endurance mountain biker before her unfortunate injury. “I went down to put my shoes on and the disc in my back came out and put some pressure on the nerve in my leg. And that was that. But you know every cloud has a silver lining,” smiled Dickens who also holds the current world record on the 200 meters track.

But her way to  watersports was not so clearly lined up – she used to have nausea because of water and therefore she hated watersports. “So for me it was a little bit of challenge to get to paddling,” she admitted and added, “but now I love the feeling of the boat moving underneath me and I love to explore speed I could have never explored before. So I got to love watersports.”

She like canoeing, because it is a sport everybody can do. "It doesn’t matter how old, how young, abled or disabled you are, anybody can get in there. And if we make it visible, more people would want to take part,” Dickens said about the inclusion of paracanoe to the program of Paralympics 2016 in Rio de Janeiro. “I want more people to understand that there is more life beyond the injury in the sports,” she said.

The sympathetic British athlete who works also as a physiotherapist is a part of the most successful paracanoe national team at the ECA Canoe Sprint Seniors Championships in Račice. The British paracanoeists have won six medals altogether – five of them are gold. “We are so lucky. We have a high professional center and dedicated coaches. Besides we are supported by the national lottery. And it makes a big difference as you can see in the level of the performances.”