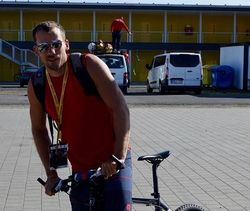 Last year he finished on the 7th place at the Olympic Games in Rio de Janeiro in C2 1000 with Filip Dvořák, but he has come to the 2017 ICF Canoe Sprint World Championships already as the coach of Indonesian canoe team and as team leader at the same time. He coaches 12 canoeists in training center 100 kilometers far from Jakarta. Here, at the Worlds, his team has 7 members, four men and three women. „I am proud of my team, they make me happy but of course our level is a bit different,“ he said.

Jaroslav Radoň has some issues with communication with local canoe sprint federation, but the Indonesian people reciprocate all the troubles with their kindness and they take care of Czech coach very well. „I have a standard European room with a view over a lake; I mean there is no better accommodation in that area. They provided me with food, I got a new motorbike, because that is the most common way of transport here. “

After five months, he already knows how to drive at local motorways. „When Indonesians want to overtake, they go upstream, horn and then they overtake. That was really surprising for me. The motorways are in bad conditions and still go up and down, so you can go maximally just about 60 kilometers per hour. And probably, I am the only one who use helmet. There is no problem to meet a small child driving motorbike alone.”

He had a crisis after one month of his stay in Indonesia and he was thinking about coming home. He had a problem with local meals because it was quite monotonous. „They produce rise everywhere around so why should they eat something else? I understand that, they fight for survival there, “he explained.

Indonesian training center is situated in countryside. „The place is quite nice, but it is really a typical Indonesian village,“ mentioned Radon. He is also in touch with grassroots. „I wanted to socialize. I try to live within the framework of possibilities and I am very often at our shipyard. Indonesians are extremely kind and wholehearted. They smile all the time and there are no problems with them.“

He speaks to his team members in English, but he has also learnt to coach in Indonesian language. „Their language is extremely easy, they do not decline. There are 17 thousands of islands and sometimes even they do not understand each other. I know how to count and basic expressions,“ he adds.

He spends most of the time at work. When he has free time, he does Thai-box or goes to near Bandung. „There is a hotel in European style, where I have met even some Czech.”