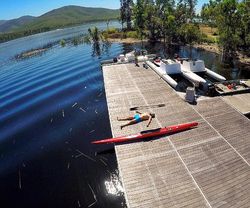 Three times Olympic medallist Josef Dostál has arrived from a training in sunny California. Just few days after his return he has started a season on Dr. Karel Popel’s Memorial, he won there 5 kilometres kayak race and also awarded some of the best competitors.

“I’ve caught a cold and it’s a bit difficult to deal with the icy water here. But we’re going to Račice on Tuesday and we will attend most of the training there, so I believe it will get better,” said the 2014 K1 1000 m world champion. Right there in Labe arena in Račice will be held the ICF Canoe Sprint World Championships from the 23rd to the 27th of August.

“I paddled 750 kilometres in California, worked out like a million hours in a gym and I didn’t count kilometres which I have run. We trained in the morning before breakfast and after it, two times after lunch, so actually all the day,” Dostál added.

Dostál interspersed three days training blocks with his coach Karel Leština and Pavel Davídek with one day off. During this pause they went to do some sightseeing, went to the national parks or went fishing. “Also we watched the NHL match – Anaheim against Winnipeg. Ondra Kaše ensured us tickets to the tenth line, it was just awesome,” Dostál said.